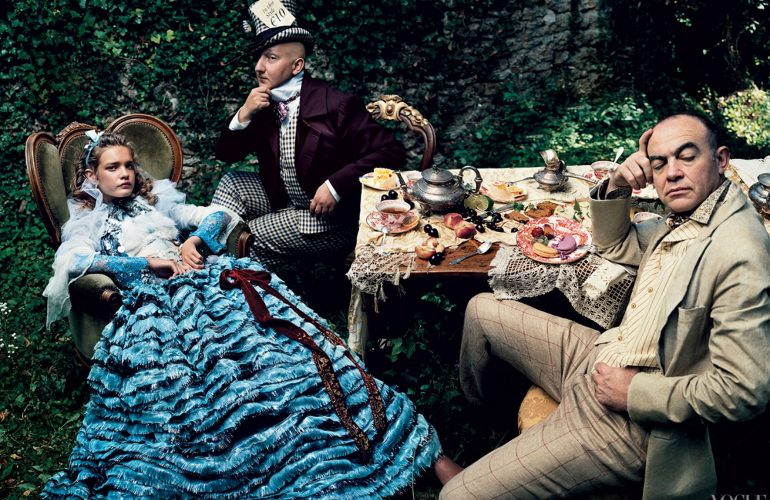 Describe the story/concept. What are the references, icons, or muses that inspired the shoot?

The concept behind this Vogue editorial is a high fashion take on the childhood fantasy Alice in Wonderland. The entire shoot is a remake of the original story and is inspired directly from the book as it recreates different scenes that are portrayed in the original version of the story.

Who are the photographer, stylist, and model(s)?

Grace Coddington, creative director of Vogue, is the stylist behind the Alice in Wonderland Vogue editorial shoot. She is known for creating some of the most complex and dramatic photoshoots that Vogue has ever featured.

Describe the choice of clothes.

The choice of clothing for this editorial is very high-end and whimsical. The designers used in this shoot include Viktor & Rolf, Christian Lacroix, Tom Ford, and Helmut Lang. The color palette for Alice’s wardrobe focuses on various shades of light blue while others photographed near her are in very neutral muted shades like tan, green, brown, and black. Alice is always accessorized with a baby blue headband and occasional pops of black in a neck bow or shoe choice. The accessorizing is pretty minimal and they let the extravagant clothing and photo locations speak for itself. The fabrics are made of silk and satin and feature elements of lace and ruffling to really speak volumes to the fairytale theme. The overall style that is presented is whimsical everything is very proper, neat and pretty to look at. Nothing seems out of place and everything plays nicely into the recreated fairytale vibe.

Describe the location: studio, outdoor, or indoor? Were several locations used? Is the precise location listed in the credits? How do you think the location fits the concept? How do the colors and textures of the location interact with the garments?

Several locations were used for this editorial and both indoor and outdoor spaces were utilized. I believe the location choices fit the concepts and garments perfectly. I don’t think they could have found any better location. The locations help to tell the story and seem to fit right in with the concept. Many of the photos are taken in what looks like a very lush and green forest. The texture of the leaves and the bright green is an awesome element to these images.

I believe that makeup and hairstyling choices are very relevant in this photoshoot. Alice is shown with a very minimal and natural makeup look to help play on her youth and portray her young features. She has a bit of a pink lip but everything else is made to look like it’s her natural look. As for hair, they left her hair in soft waves that almost look like it is the model’s natural hair. Most of the time her hair is tucked back with a headband and just falls naturally as it would out of the shower. I think the stylist chose these not only to portray her youthfulness but also to let the location, clothing, and theme do the talking.

What types of poses do the models perform? Dynamic, standing, sitting, jumping, etc. How do the poses help showcase the garments? Are there any close-up shots?

The model portrays a rather large variety of poses in this editorial. I think the diversity in attitude and posing really helps build upon the concept. Photos of taken of the model relaxed sitting back in a chair with a smirk on her face, as well as standing square on with the camera as she places her hands on her hips in a power stance. The variety in these photos really goes nicely with the feel of the editorial and helps to develop the story. We also see Alice crouched over on the ground and on a mantle climbing through a mirror. The diversity in these photos and poses really make this editorial stand out. The poses are used to help show off the best pieces of the garment. When she is lounging and laying back you can see beautiful ruffle skirts draped over her and when the is facing the other way the photos show off back details of the garments. I believe the posing was very strategically planned for each garment to show its best characteristic.

Is this editorial simply presenting a trend from the runway, or does it play with a more personal, artistic point of view?

This editorial was definitely created from an artistic point of view as it pulls inspiration from and recreates the scenes of the original Alice in Wonderland fairytale.

View all posts by haileecerva